Y’all are horrible, ya know? I put great effort into blogging a lot in September, and my views drop considerably (except for the week I blogged about Megan Fox, but her post was only third highest! Ha!!) … but I don’t blog for yet another month and my views go up and remain a constant 20-30 a day.

What is wrong with you?

No, that was not a rhetorical question! I want answers! Comment them!

But let’s not go into how you never comment…..

So October 3rd, I went to see Zombieland. 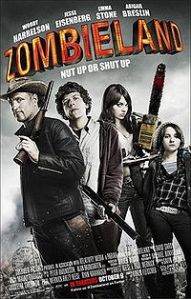 There was one scene where I jumped. That’s it. Aside from that, the story was 90% funny, with a brief 10% of truly emotional back ground. A few scenes were very touching.

The zombies were not of the undead variety, rather they were the diseased living person type from 28 Days Later. They were also not very scary, despite the buckets of blood and creepy costumes. It was difficult to take the zombies seriously, when the opening credits are a slow-mo montage of spectacular zombie chases and attacks. (There’s a particular zombie-stripper moment which truly demonstrates the effect of gravity on breasts.)

The film contains many little flash backs, montages, and cut-aways, which make it obvious the film is going more for laughs than scares. (I really can’t imagine who they were planning to scare with hilarious set-ups like the Zombie Kill of the Week; the rules Columbus comes up with to survive the Zombie Apocalypse, such as “Beware of Bathrooms: Zombies like to attack at vulnerable moments;” as well as Columbus’s irrational fear of… everything. Including clowns. Worst is zombie clowns. Even I have to admit that one would actually scare me if stumbled upon in real life.)

The touching, emotional plot point steps in entirely in Tallahassee’s character, both the strongest and most withdrawn, yet the most emotional and connected to his past. While Wichita, her sister Little Rock and Columbus appear to have accepted the change in the world, as well as lost family and loved ones, with the ease and tolerance of the disconnected-from-people perspective of the young today, Tallahassee is closely tied to what he lost that he loved most dearly. When Columbus realizes just what the strong cowboy is talking about, and reveals the truth to the audience, a tear springs to the corner of your eye.

As such, I feel like standing on a podium in front of a tent decorated with zombie posters from the film, and harking about it’s complete package-ness. It’s touching, there might be a scare or two in it for you (if you’re easy), it’s hilarious, there’s a quest for Twinkies, and a Bill Murray cameo that was for once kept entirely out of the film’s press and took everyone by surprise. It has everything you’ve ever wanted in a zombie comedy!

I can’t wait for this movie to hit DVD shelves everywhere. It will be added to the collection.

Starring Woody Harrelson, Jesse Eisenberg, Emma Stone, and Abigail Breslin, with Bill Murray appearing as himself, this is the extent of the cast, aside from zombified extras.

So run out and see it if it’s in theaters in your area, or wait patiently for it to come on DVD, or steal it in transit to the dollar theater. Whichever option suits you best.

A sequel is possibly in the works, which would include the same returning cast, so keep an eye out for that. As such, I leave you with… 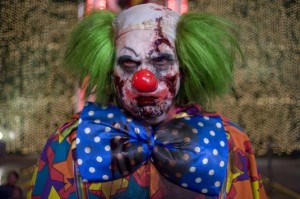 NaNoWriMo is coming up. No, that’s not some Mork word. (If no one gets that, maybe I’ve watched too much old, old, OLD Nick at Nite.)

National Novel Writing Month is an event held every November, where thousands (millions?) of writers and wanna-be writers congregate at www.nanowrimo.org to fulfill their dreams of writing a novel in 30 days, at a pace of about 1,367 words per day.

There’s tons of forums to find encouragement and discuss frustrations.

The main idea is to write as much as possible as fast as possible to satisfy the 50,000 words by November 30th deadline.

If you make it through, there’s a prize. I do not recall what it is. Oh, wait, self-esteem and confidence. You wrote a novel. It will probably stink, but you still wrote it.

I’m trying again this year. I say “try” because I’ve yet to make it through the month and finish a 50K novel.

Usually, my problem is I take on too many side projects during the month and don’t leave enough breathing room to work on a novel. I have four days before the month starts again, I’m taking down a few notes and ideas to work on, then we shall see how it goes again this year.

Most of all, it’s about having fun. Not everyone who signs up succeeds, most just have fun getting as far as they can. There’s a lot of wonderful and helpful tips on the website for writing during NaNoWriMo, as well as in general.

So swing by and make yourself at home if you’re a writer. If you’re not, I must ask, who said you weren’t? Take your browser there and sign up. Do something new and different, even if you think you’ll fail, doesn’t mean you shouldn’t try.

I can’t wait to see how a new blog affects the views. I wonder if they’ll rise or fall? You fickle, fickle readers.

Keep an eye out. I’m going to do a review of Paranormal Activity here in the next few days. (When I find the odd moment of quiet time. Even now I am being smothered in the wee hours of the morning before school. Already the munchkins are up and hovering.)

See you on the flip side!