Okay, maybe I’m just vain… but I found re-reading this post so funny, I decided to bump it to the front page.  So, here we go again!

Before you ask me what the hell I mean, I will elaborate.

I was building my “Project Playlist” at that magnificent site you can find here. Which is actually rather addictive. I was looking for a song I wanted to hear but didn’t already have on my computer and ended up searching for and adding songs to my playlist for nearly five hours. Part of the time was, of course, spent trying out links and making sure the song was intact, but all that side, it was a pleasurable experience.

I started out looking for a couple songs and then music I listen to now but don’t have to eventually adding a lot of music that I used to listen to in high school, e.g. a lot of hip-hop. I’d forgotten how much I use to enjoy DMX, Ludacris, Busta Rhymes, etc. Listening to this music was like being sixteen again. I was overwhelmed with memories of driving around in my piece of crap hand-me-down 1992 Ford Tempo with the nice stereo my mom thankfully left in it blazing away. 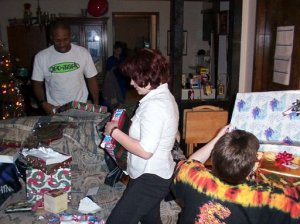 I really miss that body. I was a slim size 6.

I haven’t dreamed of being a size 6 since I had my first kid.

The hardest part is knowing that it was only 6 years ago!

I was your average teenager, I suppose. Top of my class in academics, part of the fencing team. Also a regular member on the Academic/Quiz Bowl team. I spent my monthly allowance on office supplies (and if you aren’t watching me, I still do!).

Okay, maybe not your average teenager.

I spent a lot of time in my bedroom writing insanely bad poetry and the occasional short story. Which were, obviously, much better. I very rarely went out with friends. I had a 10.30pm curfew. Really. I wasn’t really interested in going out anyway. What do 16 year olds do for fun anyway? Go to the skate-a-rena? See a movie ten times? (Which, by the way, I did have several friends take me multiple times to Titanic. If anyone mentions watching that movie I feel like being sick.) Play putt-putt? Not saying there weren’t the occasional “high schooler” parties I got to attend.

Well, just that one time when my friend’s older sister held a Halloween party where someone spiked the Sprite so me and my friends ended up a little tipsy. And an old, dear friend of mine locked herself in the bathroom because she thought she was drunk. And that one high school guy kept cornering me–I remember hoping that I was finally about to get my first real kiss. But nope. *sigh* That didn’t come for another year. Course, those events were when I was 15, so are those even appropriate in a blog about my 16-17 years?

I must admit though, I do enjoy being an adult (over 21) more than being a teenager–even if I am twice the size I used to be. At least now I can go to the real club, dance and drink all I want. (If someone else is driving–I am a responsible drinking adult.)

Sitting here, remembering all those crazy parties the said friend above used to hold. The one who locked herself in the bathroom, not the one with the older sister. I remember playing “truth or dare” maybe two, three hundred times over those years.

Although there was one big problem with that. I very rarely got dared to do anything–everyone always skipped me. Maybe they didn’t think I was interested? Probably. I was the “goody-two-shoes” of the group. Not that I nay-say’d them, but I did stand aloof–more an observer than a participant.

But I was told, after high school ended, that the reason I wasn’t… hmm.. how to say?…. admired as much as my girlfriends was because I was intimidating.

Which I found shocking.

I mean, I’m 4’10” tall. Or should I say short? I wasn’t a big, blocky kind of girl. (As evidenced above–even now I’m not.) I couldn’t begin to understand what could be intimidating about me. The hobbit of the group!

I was also told that it was the force of my personality–my intellect. Apparentally I’m overwhelming.

That I can understand.

I have irregular mood swings. I’m pretty smart. And I’m an alpha. I dominate most things. Not consciously, I just do. My sister absolutely refused to let me hang out with her and her friends because of that. Still does. I’m charismatic, with an engaging, magnetic personality.

However, I tend to believe I’m one of those people you either love or hate.

But I’ve got insider information that at a lot of those parties, there were guys who liked me and would’ve loved to play “dare” with me. Except they were terrified of me!

That’s enough of memory lane. Did you enjoy the insights? Did you get any new knowledge about me? Learn anything?

I sure hope so. Otherwise I just posted an old photo of me for my vanity. And I hate that idea!

And just for comparison, let’s add in a very recent picture of me now.

Keep an eye out for Part 2 of my series, The Writer’s Online Tool Box. Coming soon!