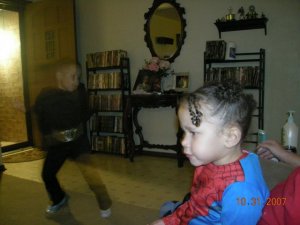 Halloween 2007 and Batman is really Superman in disguise. Faster than the speed of a digital camera!

Or Sugar Rioting? Which is more suited to the holiday where you get free candy from complete (or nearly complete) strangers?

Just thinking about that, taking your kids and walking door to door in search of sugary treats you’ll comb through later to make sure none are previously opened, have small injection holes or are stuffed with razors, makes me ponder upon the world of today. Years ago, neighbors were just that. Neighbors. They knew each other’s names, borrowed (and returned?) lawn equipment, cups of sugar. They got together at block parties and barbecues. Or just sat together and watched the sunset, drinking a cold one. The women talked gossip, the men bickered sports.

Neighbors used to be people too.

Now there’s a few holidays where you might bump into them (Halloween, Christmas if you carol, Fourth of July if they come out complaining about the illegal inner city fireworks you’re shooting, etc.) — but for the most part, people don’t interact the way they used to. Next door neighbors were people you could count on in a time of crisis; now you’re lucky if you get a two minute conversation at the mailbox. (Or cursed, if you’re one of those people.)

I’ve got neighbors on all sides of me. We just happen to know one of the tenants across the street–she used to work with my husband. And I don’t know a single person’s name. Another neighbor and I talk here and there, when I happen to be outside, but can’t remember her name to save her life. Even back in our apartment days we weren’t on a first name basis with any of the neighbors. Or even a “recognize them later” basis. The only neighbor we knew decently was the old lady downstairs who kept banging on our floor and once we had to call the police on her. (Yeah, it was that bad. The baby–emphasis on baby–woke up at 5 a.m. She started banging on her ceiling when Alex started crying and I turned on the t.v. to give the poor tyke some background noise. Pretty bad.)

I get distracted easily. I’ll finish up with the neighbor thing in a sec. But before I lose your attention (if I haven’t already, you ten-second blog fiend!), I’d like to show off the home made zombie costumes the kids and I just finished. And the fake blood I made to go with it. 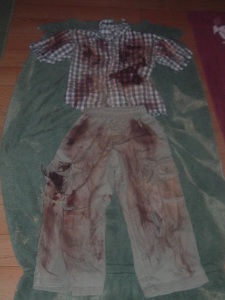 Mike's zombie costume. Are you digging it?

It’s some of his old, too small clothes. Ripped, bloodied and dirtied. Isn’t it awesome?

And here is Alex’s costume: 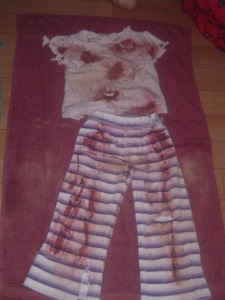 Alex's zombie costume. Don't get too close, she bites!

It’s going to look so cool when she puts it on.

They were pretty simple to make. If anyone out there rather (or finds it necessary) to keep Halloween on the budgeted side this year.

1) Take some old clothes that don’t fit that well anymore and lay them down on an old towel or sheet.

2) Mix the fake blood. (Find the recipe below.) Drizzle, drop, spoon, rub, whatever method you prefer to dazzle the clothes up with some gory color.

3) Take some powdered cocoa or just plain ol’ dirt from outside and rub it around on the clothes–give them an ‘undead for days’ look.

4) Using scissors, make small cuts and let your kids (or if they get tired or distracted, you can do it) rip the clothes as much or little as they (you) like.

And you’re done. Easy peezy. I spent a dollar on the food coloring for the blood and that was it. Awesome, eh? Well, not to mention the 3.00 on some white pasty make-up foundation and colored make-up pencils for later decoration.

My kids love zombies. (Remember, they never watch anything really scary, just the funny ones.) They also love playing zombies. You never know with my kids when a game of tag or tickle will end up with an ‘undead’ child chasing you around the house.

I’ll post pictures of Halloween night of course. So keep posted until then.

1) Take a small bowl, preferably something if you damage you don’t mind its loss, and fill it with pancake syrup. Maybe a cup/half a cup or so. As much as you think you’ll need. The syrup is the foundation and whatever amount you choose will be about how much you have.

3) Add a tablespoon or two (about 2-3 passes around the bowl) of Hershey’s chocolate syrup.

5) Add some flour or cocoa powder if you’ve got it. Either one helps the blood get a little thicker and hopefully more ‘realistic.’

7) Add a drop or two of green or blue food coloring to darken it just a little. And then you’ve got a great mix of fake, non-toxic, maybe edible, (though sticky) blood. 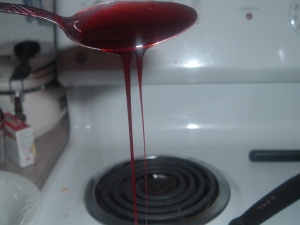 I vant to suck your... sticky red colored syrup?

Back to the neighbors. I’m hoping one day to find a place that’s not too small, not too big where I can get to know my neighbors. But that’s probably dreaming too big these days. You never know who lives next door.

But I’m just innocent enough to keep believing I might luck out and get Ed Gein or something. 😀

What? Did you forget, I’m a horror writer?? Muwahahahahahahhahahahahahaaahaaa!!!!

One response to “All Hallow’s Eve, otherwise known as Sugar Looting”