Well, here it is… 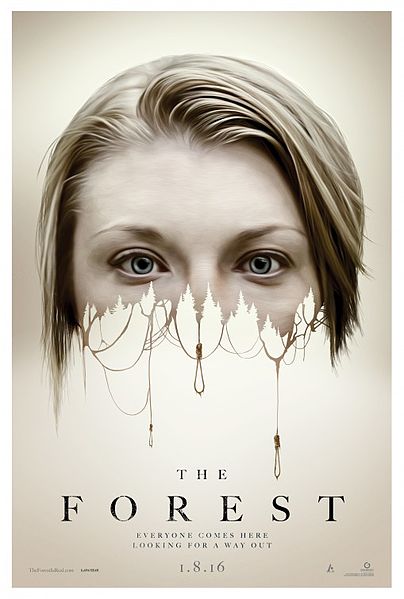 There were 2 films I was excited to see in January. The Forest and The Boy. Albeit, until now I didn’t know that January was the time of the year production companies send horror films to die a quiet death. Putting a horror film out in January is essentially the Kevorkian method of euthanisizing a film. (Thanks, review I read for research! Learn something new every day.)

What do I have to say about this film? It has some truly beautiful scenery – I want to go camping in this forest, ASAP. The forest itself has to be the 2nd prettiest character, but the best (and most deep) character of all. 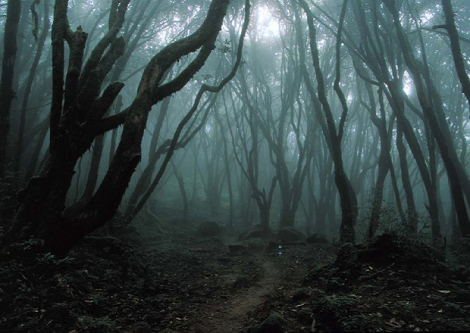 Isn’t this beautiful? Don’t you want to lay a tent down in that gray fog?

While twins Sara and Jess were written as one-dimensional and Aiden’s “suspicious” reporter/tourist is pulled out of every video game/horror film we’ve seen with a “suspicious man” trope, the forest – Aokigahara – really steals the show. 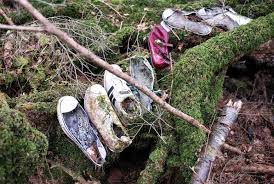 How can a forest where this is a common find not steal the show?

There’s some backstory given about the forest, and how it developed the colloquial nickname “Suicide Forest.” Back in the day, families who were struggling would take sick and infirm members to the forest and abandon them there, particularly the elderly. The spirits of these abandoned loved ones grew angry and haunt the trees now, leading those who desire to commit suicide – or are hesitantly facing that penultimate question – into committing the act sooner, to appease the spirit’s rage.

The film never really explains better why the forest has become a haven for suicides – except to say that it’s a large forest and it’s easy to disappear into it, becoming lost and forgotten. There’s some delicate touching on the depression, fear, anxiety, and troubles that can lead some to choose to stray from the path. (The forest path, not some existential path, I mean.)

Perhaps what the film does best is repeat (nearly word for word) the behind-the-scenes featurette (online video/short doc) about Aokigahara.

Albeit, I think the 20 minute short film by VICE news (in 2012) is better in terms of connecting with the audience than the entirety of The Forest.

There’s some reveals about the twin’s history that plays a somewhat… No, it’s not important at all except as a device to allow the writers to “scare” the audience with shocking revelations and scary “hallucinations” Sara experiences in her search for her sister.

It’s repeated more than once that the forest will fuck with your head, especially if you’re sad – it will make you see things that aren’t real, to lead you deeper into the trees and closer to killing yourself (purposefully or not). Sara falls victim to these enough times to make you want to scream. Despite how intelligent Sara seems at the beginning, she transforms into the “maiden-in-distress” as soon as her feet touch the forest soil. Helpless and stupid.

Which is none of Natalie Dormer’s fault. Actually, upon realizing that the “sister” was actually a twin – and Natalie Dormer was in it TWICE, I was more than happy to put up with whatever bullshit for twice the Nat.

This is Queen Anne (and Queen Margaery) after all. In fact, a happy break time is called for: 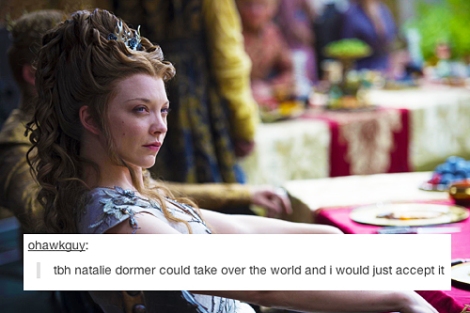 Yup, ohawkguy. I’m good with that, too.

Aside from the pretty environment, the interesting history of Aokigahara and the Japanese spirit folklore, and Natalie of course, the only good takeaway I had was the obvious ending – but because I think this is the one time the film delves into depth and required thinking.

If you haven’t seen the film, and don’t want to spoil this very obvious conclusion, for your sake I will change the color to white. Highlight if you want to read.

The end of the film comes down to Sara facing her fears about the reveal of her parents (their murder/suicide death), that her sister saw their bodies and she didn’t. Then she runs into the trees, screaming for her sister and – OMG – seeing her. Jess has survived the last 5 days lost in the trees (there’s still no explanation for why she ventured into the forest alone in the first place, particularly prepared with a tent and supplies except a sketchy “she romanticized suicide”). Both begin running to the lights of the search party looking for them – but only Jess reaches it. Sara runs into a spirit, the same one that plagued her since she entered, only to realize she’s been convinced to kill herself through forest trickery. She is sucked into the ground – cut to Jess acknowledging that their twinastic connection has been severed.

This is the moment, and the only one of which, I felt the film reached any depth. Reading between the obvious crayon lines, it appears as though the forest – which feels cheated by Jess’s survival (after all, a single day in the forest was enough to drive Sara to seeing hallucinations and losing her marbles) – has taken Sara’s life in exchange for Jess’s. I though this an interesting complexity. Jess is described through the film as traumatized following her parent’s death – and seeing their bodies and the extent of that horror – and as attempting suicide on at least two previous occasions. Yet despite this, she has managed to put aside the forest’s attempts to lead her astray. Her foray into the Suicide Forest only solidified her desire to live, while Sara’s journey revealed her weakness of spirit, and inherent sadness.

Who really is the sister who has (had) it together? Was it Sara with her textbook fiance or Jess who dealt with her emotions openly, albeit not always healthily?

Ah, the things you contemplate while watching a film you really, really want to like because it has one of your favorite actresses in it (TWICE! Can I emphasize that enough? She’s in it TWICE!) and yet you’re bored out of your fucking gourd.

So, there it is. The Forest isn’t really worth ticket money. Maybe Redbox bucks, but not 8.75 for bargain matinee at my local theater. (But at least I have enough to see The Boy later this week. I heard that one’s actually pretty good. Word of mouth from a coworker. We shall see.)

And Crimson Peak is finally on DVD. I missed seeing it in theater, and I’ve been waiting with bated breath. I really love Del Toro’s work. So expect to see an HDH about the red mountain film in the coming weeks.

Look! Something the film got right!