First let me say that I wish I could visit the bookstore this antho was spawned in. Located in Burbank, California, Dark Delicacies is the only horror-themed bookstore in the U.S. The store was founded by Del Howison and his wife, Sue, in December 1994. And I really really wish I could visit. Maybe one day.

That said, the first in the anthology series, “Dark Delicacies,” is a doozy. Edited by Del and Jeff Gelb, editor of other great antho series such as “Hot Blood” and “Flesh and Blood,” this book definitely packs a punch. It features an array of authors, such as Clive Barker, Ray Bradbury, Ramsey Campbell, Brian Lumley, Whitley Strieber, F. Paul Wilson, and many more. The stories range from humorous to downright terrifying. The one I remember most is a story by Rick Pickman, “Dark Delicacies of the Dead.” This is Pickman’s first piece of published fiction and it’s hilarious. Crazy, outlandish and a shining example that not every story needs to be serious. Sometimes it’s just about the entertainment.

Another story I enjoyed was Steve Niles, “All My Bloody Things: A Cal McDonald Crime Story.” It features some great characterization, an ‘out there’ kind of plot and the ending is… well.. out there.

But it’s been a while since I’ve read this edition so I really can’t get go in-depth about any of the stories. Just that I enjoyed them and other horror writers/readers should consider picking it up. 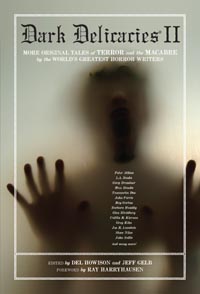 Because I enjoyed the first in this series, I asked for the second as a gift for my 24th birthday. (If you missed out on the gift giving, you could send something my way–go to my wishlist on Amazon. I know, I’m shameless…) And I really appreciate it. (Thanks Tiffany! *sister in law*)

DD2 shares only one author with DD1 (Steve Niles, with “The Y Incision: A Cal McDonald Crime Story,” which was another riveting tale). The rest are new to the series, such as Max Brooks, John Farris, Joe R. Lansdale, Glen Hirshberg and many more.

Since I just finished this one, I can offer a little more in reviews.

The book opens with Barbara Hambly‘s tale, “Sunrise on Running Water.” It makes no bones about it’s protagonist, an Aristocrat vampire named Napier, also referred to as Lord Sandridge. He is fleeing the watchful, revengeful eye of Alexandra Paxton, the sister of a prior victim. Napier/Sandridge is crossing the ocean in the early 20th century, eager to leave behind his old life. And his enemies. I rather enjoyed the way Hambly was straightforward about the protagonist, his abilities and his limitations. The action in the tale is well paced and believable. Her writing is strong and concise, which is something I prefer in my reading material. She includes a nice twist at the end, giving the reader a chance to wonder.

Another tale that’s worth the read is Peter Atkins‘s, “Stacy and her Idiot.” I was surprised by the strong characterization and ultimately, the outlandish way it ended. It’s rare to read a story that includes a strange, unexplained subplot that makes almost no sense, but you still leave the tale fulfilled. Curiosity unsatisfied, sure, but it’s not necessary. Sometimes that’s what makes a story great and it certainly gives this tale more than just your average flare.

Harry Shannon has a story in the book as well, entitled “A Host of Shadows.” One of my favorites, it leads the reader down a twisting tale of medical terror, then reveals itself to be something else entirely. It does so with humility and a care to the reader, using no tricks or magic-hat illusions to connive the reader. Shannon gives you a dish of pudding, reveals it to be congealed blood–and you still keep eating.

John Farris’s story, “First Born,” is just great. Another of those “curiosity unsatisfied” stories that you still find entertaining.

So pick up both these books, be entertained and if you’re in the Burbank area, stop by Dark Delicacies and give my love to Del Howison. Tell him to keep ’em coming.

One response to “Dark Delicacies I & II”