Simple and sweet. My son’s first week in Pre-K.

For the last four week days, the house has been very quiet. Alexandra doesn’t make a whole lot of loud noise, nor does she make a huge mess. I’ve been able to get through a good amount of submissions for Dark Recesses Press, and even get some writing done. It’s been nice.

But it’s also kind of sad. My family is entering a new era of life — school.

He’s been good so far and that’s great. I was expecting him to get bored with the routine quickly and then… well… anyway.

Here he is on his first day of school.

He wasn’t exactly happy in this picture. He was ready to GO!

But he cheered up a few minutes later and took the cutest picture of himself. (Did I tell you already? No? Well, my four–soon to be five–year old son is a little photographer? Before I’m done I’ll post one of his “artsy” pics and let you judge for yourself.)

*sniffle* Just posting these pictures makes me miss him. Although, I definitely don’t miss the noise.

Thankfully Alex hasn’t been wandering around the house crying about her friend being gone. She’s adjusting pretty well. Hopefully I don’t start bawling as time goes on. It gets better, right?

Here’s the first picture he’s made out of macaroni. 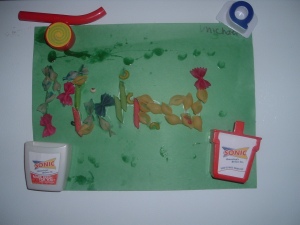 So now I’m a school age mom. This will be a totally new experience in my life, but new experiences are good. It’ll give my writing a new depth. Or at least a new topic. Beware for new horror from me involving school-aged kids, school, moms, etc.

And here’s the artsy picture I promised. Let me know what you think.

I don’t know what this picture is supposed to mean. Maybe something about man’s dominance over dinosaurs? But he sure looks cute, doesn’t he? I’ve got so much worry to look forward to when he hits his teens. *sigh*